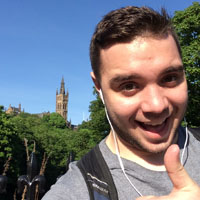 Austin Meyer is a theatre educator, acting coach, director, and actor from Michigan. He received his BA in Drama from the University of Michigan (Ann Arbor), and his MA in Actor Training and Coaching from the Royal Central School of Speech and Drama (London).

He has taught and coached at Utica High School, the University of Michigan, Arts Educational School of Acting, Rose Bruford College, Acting Coach Scotland, the Edinburgh Fringe festival, and as a freelance coach.

He has been with KCYA for nearly a year since moving to Kansas City, and has loved his time here, where he has served as assistant director for the summer 2018 production of The Jungle Book Jr. as well as a teaching artist for many camps and classes.