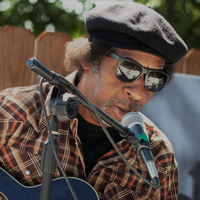 Lem Sheppard began performing as an artist in residence in public schools in 1985. His academic background in music education and music performance makes school assemblies a perfect fit him. He has been a resident artist in Kansas, Oklahoma, Missouri, Ohio, Tennessee, as well as South Africa and Brazil.

From 2001 to 2013 he toured the United States performing 150 or more school shows per year in over 45 states. His unique repertoire has given him the opportunity to perform at churches, folk festivals, blues festivals, jazz festivals, and at the Kennedy Center. School presentations give him chance to perform all the music that he loves and connect students to a single period in American history.

Lem has received awards from the Kansas Folklore Society, the Oklahoma Blues Hall of Fame, and in 2017 he received the Meritorious Achievement award from his alma mater Pittsburg State University at Pittsburg Kansas.