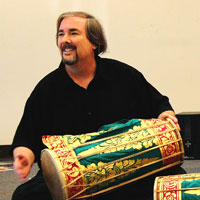 New World Connections is a trio made up of: Tom Aber, Gregg Briggs, Mark Cohick, Ron Hathorn, and Pat Conway.

Thomas Aber, a founding member of newEar contemporary Chamber Ensemble, is also the bass clarinetist with the Omaha Symphony.  His studies of the bass clarinet took him to Julliard and then to the Netherlands, where he studied contemporary techniques and repertoire of the bass clarinet with Harry Sparnaay. In 1979 he was a prize winner in the Gaudeamus Foundation's International Competition for Interpreters of Contemporary Music. Aber earned his D.M.A in clarinet at the Conservatory of the University of Missouri-Kansas City. His musical interests are wide-ranging, extending from many current styles to traditional music and traditional instruments from the Balkans and Turkey.

Patrick Conway is a percussionist, wind player and composer. He has studied with noted master drummers from around the world and has traveled to Cuba and Bali to study. Pat holds a Masters in Music Composition from the UMKC Conservatory, was a founding member of newEar and works with Peoples Liberation Big Band, Chris Hazelton's Boogaloo 7, Matt Hopper’s Agora, Expassionates, Arnold Young’s Roughtet and BCR. He currently is director of the community Balinese gamelan orchestra Gamelan Genta Kasturi who recently premiered a new work “Samvartaka”.  Mr. Conway is also a recipient of the Charlotte Street’s Generative Performing Artist  Award.