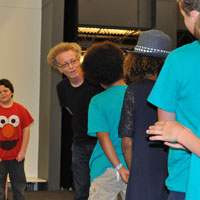 John Mulvey holds a Bachelor of Theatre Arts degree from Benedictine College in Atchison, Kansas. He has performed in plays such as One Flew Over the Cuckoo’s Nest, as well as children’s theater productions.  John has taught acting classes at Longview Community College and KCYA’s Community School of the Arts, and currently teaches acting classes for Theatre for Young America.

John performs regularly with the improvisational and sketch comedy group Out on a Limb. His group headlines shows for the Stanford’s Comedy Clubs. Out on a Limb has also been featured on KCPT’s Marquee and on the FOX network.